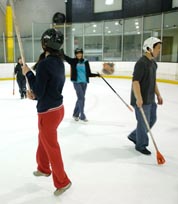 Looking for that special event that can be played by all? We have the game for you and your group!

Broomball is a recreational ice game originating in Canada (also contested as being Swedish)
In a game of broomball there are two teams, each consisting of six players: a goaltender and five others. The object of the game is to score more goals than the opponent. Goals are scored by hitting the ball into the opponent’s net using the broom. Tactics and plays are similar to those used in sports such as ice hockey, roller hockey and Soccer.

Players hit a small ball around the ice with a stick called a “broom.” The broom may have a wooden or aluminum shaft and has a rubber-molded triangular head similar in shape to that of a regular broom (or, originally, an actual corn broom with the bristles either cut off or covered with tape).
A maximum of 12 players to each side using the full length of the ice surface plus nets. Equipment which includes, helmets, broom ball sticks, and ball are provided and included in the price.